Made it to the SFIAAFF '09 San Francisco International Asian American Film Festival again this year... and there are two films I recommend for sure if you can catch them either in the festival here or coming to a film festival near you... or there is always Youtube... but I wanna throw some props out to these two outstanding films.

The first is HP Mendoza's FRUIT FLY which I caught at the film festival on it's premier night in the Castro Theatre and loved it. A San Francisco based setting is perfect for this film, and it was well received in the Castro. A great movie by a very talented artist, director, filmaker, songwriter all in one! And, if you haven't seen a movie in the Castro Theatre, then you are missing something truly special. Here is the trailer...

The second is Harry Kim's Documentary DIRTY HANDS: THE ART AND CRIMES OF DAVID CHOE about street artist, illustrator, and hard workin' punk ass David Choe. Now I have been fan of David Choe's energy and talent for years and I am always glad to see a fellow artist who puts his ass on the line taking risks and becoming immortalized in something like this, but lets not overlook the fact that David has paid a heavy price or two for a life like his. But I have been watching the clips of this documentary role out for over a year and the life and times of Mr. Choe guarantees to make interesting documentary film subject matter, so HOLD ON!


Go see 'em folks... get out and support your next generation of film makers and support the SFIAAFF !!!
Posted by Trey Gallaher at 2:17 AM No comments: 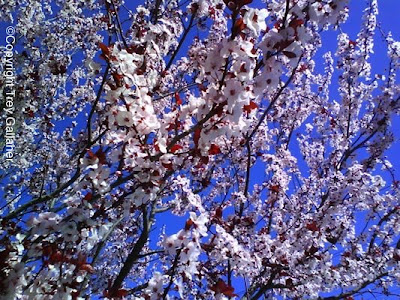 Every year at the end of February here in California and specifically San Francisco my favorite blossoming fruit tree takes it's turn to remind me of many precious things in my life. About the time of my grandmother's recent passing several weeks back, I was sweetly reminded of her every morning that I walked passed all of the blossoming Japanese Cherry trees that line the many steep sloping streets of this fair city. After reading up a little about the tree and others found in San Francisco, I was surprised to read that the Japanese Cherry Tree is the second most common tree in the city! Second only to the more popular and slightly more exquisite flowering Japanese Plum tree which looks almost the same but with slightly more brilliant pink flowers. The plum tree also has a twin albino version of it that is even more rare and is a white flowering tree with green leaves instead of the red leaves. Everyday for about two weeks I was taking pictures of the magnificent sweet color that these trees bring to the beautiful clear blue back drop skies that we get here in the winter. And if you stop, and smell the gentle breeze, you might just catch the lovely sweet scent of bubble gum that these flowers give off. It is good to be alive! I am reminded to take time... and enjoy these pics, and one of the true treasures found on the planet. 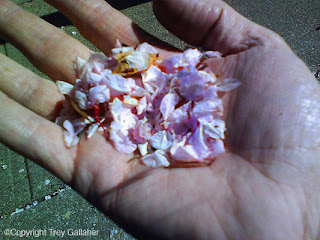 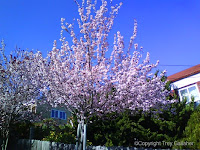 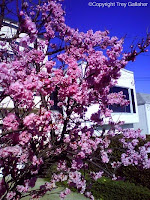 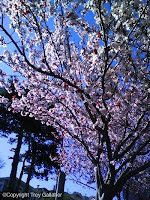 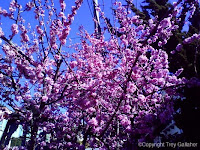 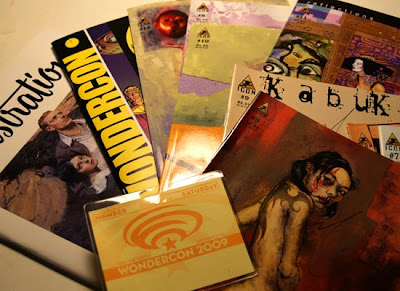 It was a blast! Another year of WONDERCON which seems to be growing year to year. I went with two of my friends Shan and Gary. There were a lot of regulars and a lot of new faces to see. Like.... 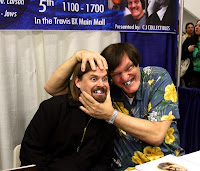 RICHARD KIEL!!!! JAWS to you and me. Yes another childhood dream checked off the list of to do's... "Get picture being choked by JAWS"... (the villian in the James Bond movies The Spy Who Loved Me and Moonraker).

A FRIGGIN RAD CYLON! Yes RAD... For you younger folks this was a dream that maybe you can't relate to, but if you grew up in the 80's, nothing struck more fear and fascination in you than an old-school cylon from Battle Star Galactica... complete with humming, oscillating red eye... You just had to be there... the 80's I mean!

And even something for the kids and perhaps the coolest costume there... I can't believe there is a guy under all that... My pal "G" gettin a shot for his three year old who couldn't believe dad met Bumble Bee...


Other great highlights were...

meeting up with one of my favorite graphic novel artists David Mack of his very successful series Kabuki... http://www.davidmack.com/

Darth Maul (the guy that played him Ray Park)...

the storm trooper who actually said the lines "these aren't the droids we're looking for" ... Anthony West (who was a very cool cat)

and that guy from Children of the Corn... you know him from and a ton of great 80's and 90's movies... the blazing red-headed punk...Courtney Gains!

It was truly a fun day that I look forward to every year. Autographs from some has-been movie and tv stars, some great artist, great art, great BOOKS on art, portfolio reviews of art, comics, action figures, costumes, creatures and contests. If you have never been, even if you DON'T like comics, you gotta check it out at least once... there is something for everyone! Actually I'm already plannin' for next year.

check out these Youtube videos to sum it up...

Thanks to my buddy Shan Senaratne for the great shots! 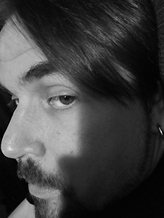 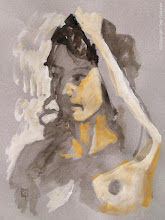